Challenging times call for radical action. So it is today, and so it was in the summer of 1982, when Church Action on Poverty was launched.

“Many people simply do not believe that poverty exists in this country,” Sister Mary McAleese from Liverpool announced at the inaugural public event.

“We are out to make them aware, and at the same time actually do something about the problem. It must concern everyone, regardless of politics.”

This drive to open people’s eyes and to bring about change remains central today to so much work in the anti-poverty movement.

A new approach: tackling the root causes, with people who know the issues first-hand

From the start, Church Action on Poverty’s approach was radical and bold. It was not enough to help people who had fallen into poverty, nor to just hope or pray for change.

We knew that as a society we should address poverty at its root, and we should do it in partnership with people who have direct experience of poverty, who can bring unmatched insight and wisdom.

A time to act, and a time to mobilise

What was going on in the UK in 1982? ET was the top-grossing film, and Eye of The Tiger, Come On Eileen and Happy Talk were among the Number 1 singles. Aston Villa were crowned European champions; the 20p coin entered circulation; the war in the Falklands dominated headlines; and a future king, Prince William, was born.

But around the UK it was a time of economic turbulence and political concern. The early 1980s had brought soaring living costs, economic strife, and an often-polarised politics.

There was a growing feeling that the churches, and churchgoers, should be more active against poverty. Church Action on Poverty was born out of those conversations. It was launched on July 5th, 1982, and quickly embarked on a relentless drive to inspire and engage congregations all over the UK.

Planting bulbs that would keep on growing

Much of the early work was driven by three Johns: Revd Canon John Atherton, whose theology underpinned much of the work; Revd John Austin, the first chair of trustees, and finally John Battle, who became Church Action on Poverty’s first convenor.

“At first, people thought we were a service provider. We would sometimes get offers of blankets and things, and we had to explain that we were focused on the causes of poverty. That took some doing, shifting the focus from personal help to structural changes. In the church and wider society, that was quite a difficult job.

“Parish groups were key across the church, and much of my time was spent on buses and trains. We had a good reception and some lively meetings. I look back on it as a time of tremendous people of goodwill gathering together. It helped us build up a real base of evidence that became a testimony and approach: letting the poor speak for themselves.

“We were sowing handfuls of seeds the length and breadth of Britain and it developed into groups of people who were really committed and who would stay with the cause for a long time. It was like we had planted bulbs that would come into flower again and again year after year after year, rather than us having to keep replanting. 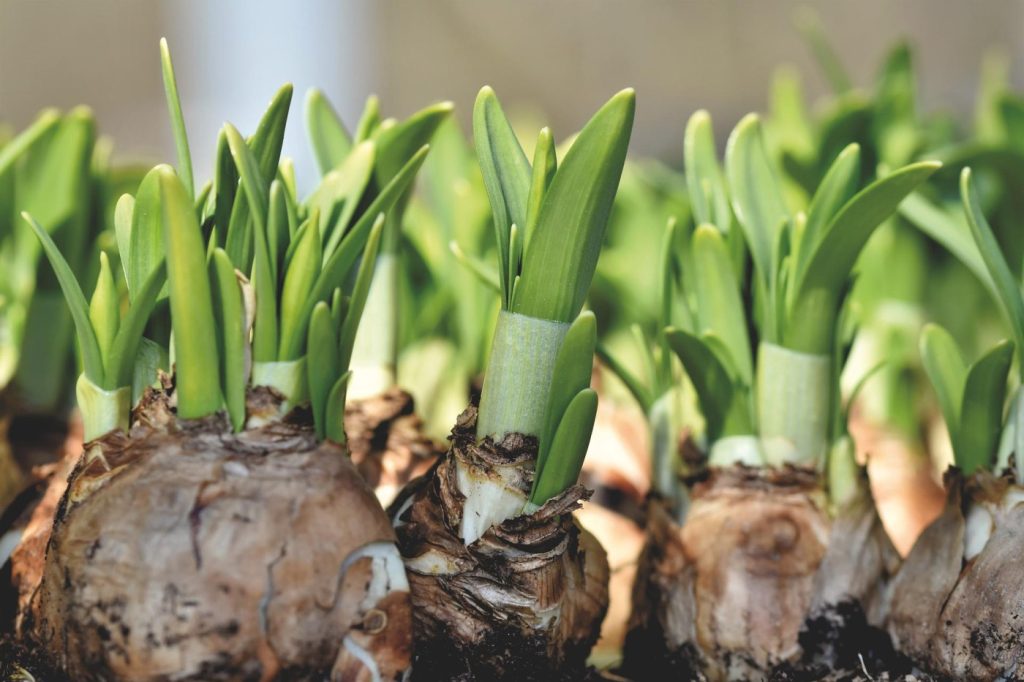 Merseyside was an early focus for much of the work, and is again abuzz with inspiring activity today, home to a dozen Your Local Pantries, a new Speaking Truth To Power cohort, and the setting for the wonderful Made In Liverpool film below, which we helped to support.

Other early work was rooted in Greater Manchester, where we are still based, in Yorkshire, in Glasgow and in the North East, including at the Meadowell estate in North Shields, where we have retained close links ever since.

Cedarwood: We are here to support the community

One of our earliest reports was Low Pay Is The Cause of Poverty, in 1984. This challenged the false notion that just having a job – any job – was enough of a route out of poverty, and became a helpful step towards the creation of a minimum wage in 1998.

It also cemented our approach of ensuring that people with experience of the issues should always have the space to speak for themselves, and to shape the solutions. In the 1980s, this was utterly radical, and it is heartening that it has today become much more widespread.

Landmark moments in the 1980s included the poverty declaration, Hearing The Cry of The Poor, and the myriad responses to the Faith In The City report by the Archbishop of Canterbury’s Commission on Urban Priority Areas.

Church Action on Poverty was playing a growing role in these conversations. In the run-up to the 1992 General Election, we asked people from many backgrounds, organisations and churches to write letters, and produced a special Dear Prime Minister edition of the Poverty Network newsletter. We then helped organise the National Poverty Hearings, which challenged much orthodox thinking about social justice and poverty, and introduced many people to a simple but radical concept: that people in poverty should lead the discussions about ending poverty. Wayne Green, one of the speakers at the national hearing, said at the event:
“What is poverty? Poverty is a battle of invisibility, a lack of resources, exclusion, powerlessness… being blamed for society’s problems”

Wayne Green
National Poverty Hearings
Wayne's story: why we must all refuse to be invisible

Like others, Wayne remains a committed campaigner. He continues to speak out in his own community in southern England, and has this year joined Church Action on Poverty’s new Speaking Truth To Power programme, aiming to further amplify the voices of people on low incomes.

Hilary Russell, who joined the council of management in 1984, and also remains an active supporter today, recalls:

“We were making a lot of calls, and had to remember that we were being political but not party political. It was difficult at times to say anything as a Christian about political issues, because you would be accused of interfering in spheres that were not ours. I remember a Sunday Times headline that said: “Church should stick to saving our souls”. 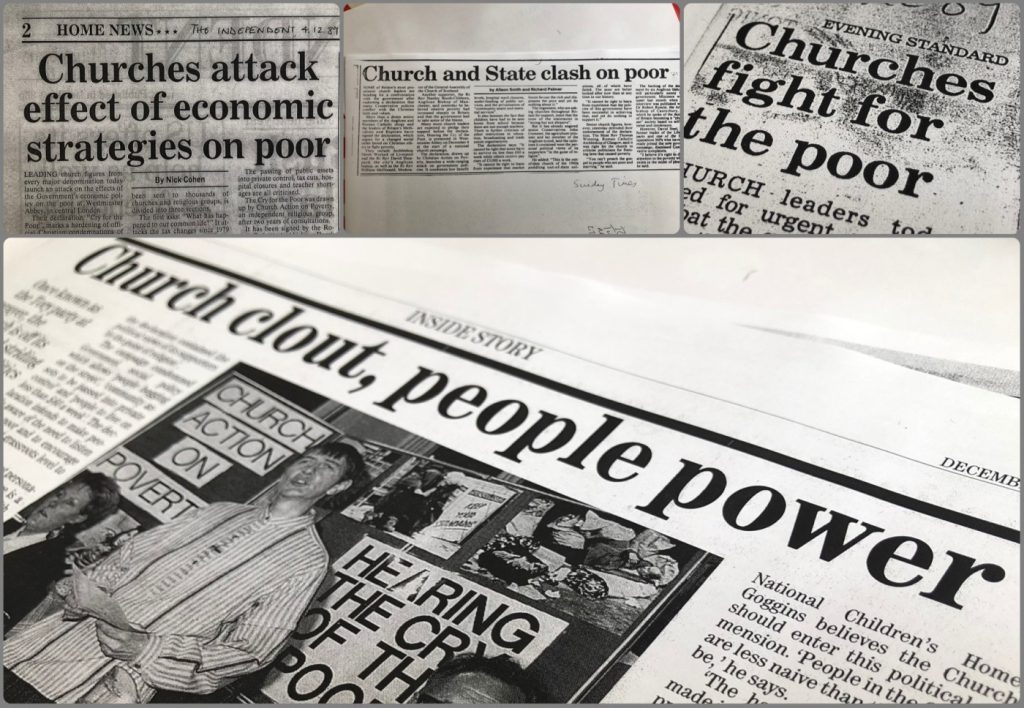 “Trying to think theologically about social action, or taking action based on theology, was seen as something that individuals might have been doing, but not organisations. That was something new and significant.

“I remember leading up to the National Poverty Hearings, we were having lots of hearings in different places. Nowadays, we are used to hearing about ‘experts by experience’, but that was an unusual idea at the time.

“When we had the very big hearing at Church House, we had MPs, local authority people and heads of charities very clearly being the audience, and the people on the platform were speaking from direct experience of poverty – the real experts. That method was almost more significant at times than the message, in terms of influencing people. It was very significant and has continued as a theme of Church Action on Poverty’s work ever since.”

As the turn of the millennium approached, hundreds of people joined in Church Action on Poverty’s biggest single event: the Pilgrimage Against Poverty from the Scottish island of Iona to 10 Downing Street. In the new century, there were big campaigns around debt and loan sharks, led by tenacious activists in North Shields; around tax justice; a pioneering push for participatory budgeting; and early research into The Right To Food, which contributed to the continuing campaign today.

The digital revolution and new technologies have changed the way supporters and activists can engage with one another, and helped to bring new issues into the spotlight.

But our core principles remain steadfast: working together with people in poverty to build a better future, driven by people’s experiences and insights. That’s how we will build a society in which everyone can live a full life, free from poverty.

Former Prime Minister Gordon Brown has joined with 56 faith groups, charities and politicians to call on the Government to take urgent action to bridge …
Opinion

James Henderson, the Development Coordinator for the Your Local Pantry network, celebrated our 40th anniversary at a Pantry on 6 July. Birmingham Yardley Wood Pantry …
News

Throughout 2022, the Dignity, Agency, Power calendar is telling stories of people who bring those values to life. July’s page features STEF BENSTEAD. In 2019, …
News

News of an exciting new partnership… and a call for churches to re-immerse themselves in their community relationships. Alone we can do so little, together …
News

Baking, walking, listening, giving – how you’re all marking our 40th

Hundreds of people have been getting involved to mark Church Action on Poverty’s 40th anniversary this year. Many of you have donated to our appeal …
News Opinion

Challenging times call for radical action. So it is today, and so it was in the summer of 1982, when Church Action on Poverty was …
Resources

Read or download the winter 2021–22 issue of SPARK, our newsletter for supporters of Church Action on Poverty.