Throughout 2022, the Dignity, Agency, Power calendar is telling stories of people who bring those values to life. July’s page features STEF BENSTEAD. 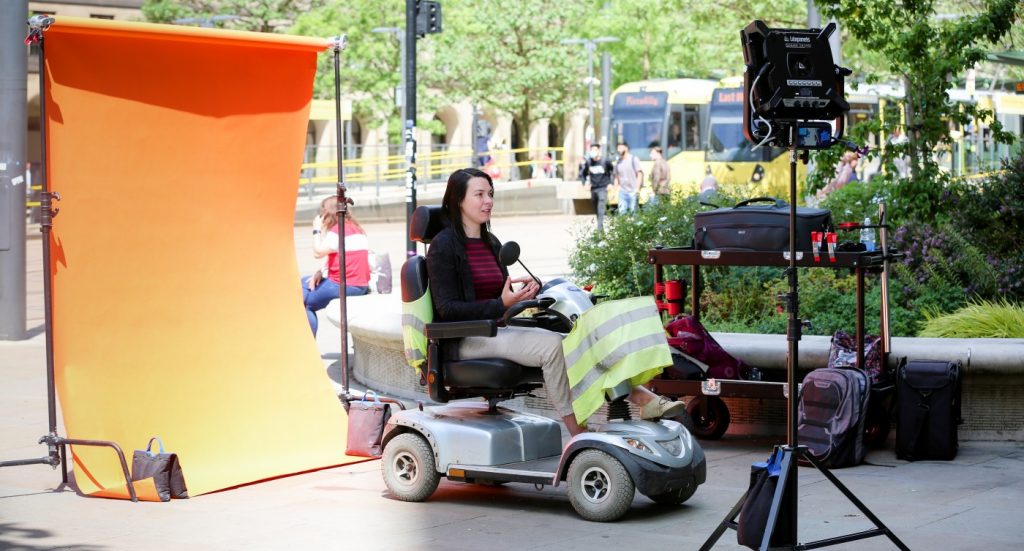 In 2019, Stef wrote Second Class Citizens, looking at the shameful way the UK state has treated disabled people, and she has also taken part in Manchester Poverty Truth Commission.

At the recent launch of the Dignity, Agency, Power anthology, Stef told Church Action on Poverty supporters about her work:

Why I wrote Second Class Citizens

“Quite often a lot of the policies and decisions being made are made by people who don’t really have enough information – people who have expertise as professionals but not by experience. They’re often not listening to people with expertise by experience, and the result is a lot of policies are harmful rather than helping.

“The reason I ended up writing Second Class Citizens was that I had a background in disability through my own illness and had gone into research. It was very clear that the Government was causing a lot of harm, but I had a lot of friends from a more conservative evangelical Christian background. A lot of friends talked about poverty and sounded like they cared but they felt welfare reform act was good, and I was sitting there saying no, it’s not, it’s awful!”

Stef cites the example of Universal Credit, where some of the founding principle and ideas were good, but where many problems ensued because policy makers didn’t think about how much people really needed to live on, the effect of switching to monthly payments, the impact on couples being paid jointly, and many other practical scenarios.

“The Poverty Truth Commission takes a similar approach on a more local level. What a lot of professionals don’t realise until they get into a commission is just how harmful some of their policies are.

“In the commission, you come together and have repeated conversations, to the point where you have relationships, and it’s really interesting.

“Within organisations, a lot of people really care and want to do right, so they’re really distressed when they hear they’re doing wrong – but they’re willing to change. You need people with experience in the room making decisions, because that’s the only way you get good policy.”

Stef: What dignity means to me

“Dignity is about having enough to live off – so you’re not scrambling for money, constantly wondering whether you can afford to have the heating on, the light on, to eat this food or not.

“It’s also a bit more than that – it’s having enough to participate in society, it’s about being able to have a friend come over and not feel ashamed that your house is cold, or having no milk to offer a cup of tea, or if you have children being able to buy them the latest thing and for them not to be excluded but to enjoy the same things their peers have.

“It’s being able to help friends and neighbours and have a reciprocity, so at least some of the time you have something to give to someone else. Also it’s about having long term security, and knowing you’ll be okay if something goes wrong. Dignity is partly about having that confidence to look to the future and say actually there are systems that will help me stay on my feet is something goes wrong.”

Stef: What agency means to me

“Agency is that control you have over your life, to be able to direct where it goes and to make choices, so if you apply for a job you’re not just stuck taking the first job no matter how awful it is. Or it’s being able to pick the subjects you do at school, or what school you go to – being able to control where your life goes.

“What a lot of people face is not having that agency. If you’re on unemployment benefits, you’re always being told how many hours you have to do, what jobs to apply for. There’s no trust on you to make your own life better.”

Stef: What power means to me

“Power, I think, is about having an impact on the world around you. Agency is partly about having impact on your own life, but power is going: ‘actually I can make changes in society as well’.

“Maybe that means being a governor of a local primary school, it might be in a residents’ association, it might mean being part of political or religious association, or maybe it’s just knowing I’m someone who, if you go to police or social care and say there’s an issue, they’ll take me seriously and involve me in the decision making process.

“We tend to have professionals who make decisions, then people who are affected, and there’s a lack of power. In general, the more money you have the more power you have and that doesn’t generally lead to a country that works for everybody.”

Stef: My hopes are for the Dignity, Agency, Power anthology

“Because I’m from evangelical background, I want to see church groupings reading this, and I would like to see Christians take seriously the command of God that we all pursue justice for the poor and oppressed and to have their hearts moved by the stories.”

Former Prime Minister Gordon Brown has joined with 56 faith groups, charities and politicians to call on the Government to take urgent action to bridge …
Opinion

James Henderson, the Development Coordinator for the Your Local Pantry network, celebrated our 40th anniversary at a Pantry on 6 July. Birmingham Yardley Wood Pantry …
News

Throughout 2022, the Dignity, Agency, Power calendar is telling stories of people who bring those values to life. July’s page features STEF BENSTEAD. In 2019, …
News

News of an exciting new partnership… and a call for churches to re-immerse themselves in their community relationships. Alone we can do so little, together …
News

Baking, walking, listening, giving – how you’re all marking our 40th

Hundreds of people have been getting involved to mark Church Action on Poverty’s 40th anniversary this year. Many of you have donated to our appeal …
News Opinion

Challenging times call for radical action. So it is today, and so it was in the summer of 1982, when Church Action on Poverty was …
Resources

We’re delighted to announce the launch of a special publication to mark the 40th anniversary of Church Action on Poverty. Published by Wild Goose Publications, Dignity, …