Father Chris Hughes shares some thoughts from our gathering in Newcastle on 9 November 2019. 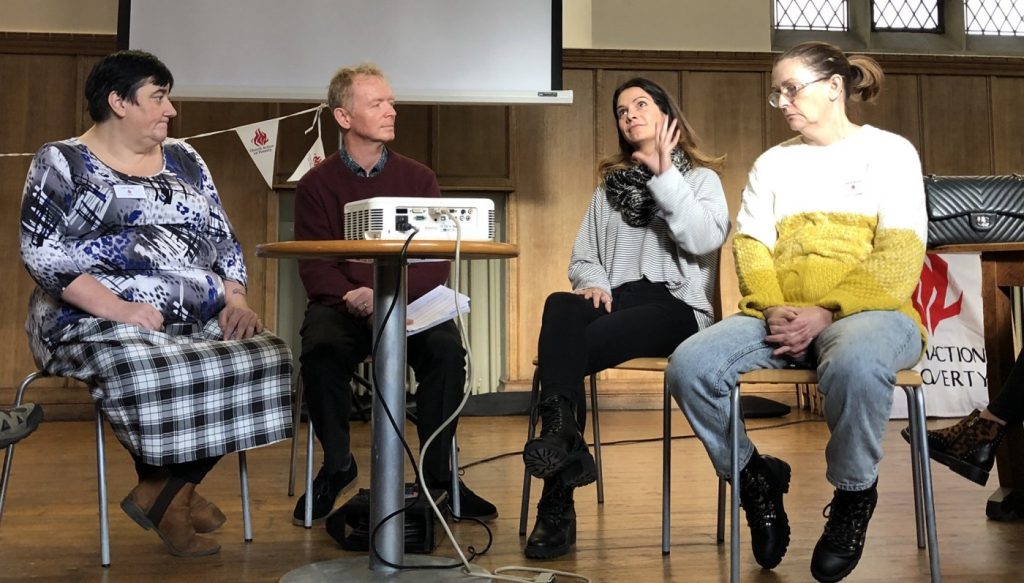 Three workshops then followed. Niall Cooper showed (but with little sound) a short film made with support from Church Action on Poverty called Edgelands. It portrays the life of young people in Lancashire, where there is little adult support as they seek to deal with caring for sick parents, little money, homelessness and drug culture. The film was very much in the style of Ken Loach, revealing the stark reality of so many young people on these ‘edgelands’.

Revd Tracey Hume, a Methodist Deacon from Blaydon, Gateshead, talked about the Gateshead Poverty Truth Commission, which is bringing together those in authority and power with those experiencing poverty, so that it is the experiences and reality of those in poverty which will inform policy.

Rev Chris Howson, the Anglican Chaplain at Sunderland University, led a reflection on Matthew’s Gospel parable of the talents. He gave an ‘alternative reading’ of the parable arguing that the hero of the parable is the man who buries his talent since he is the one speaking truth to power.

The final input of the event was led by Debbie Honeywood, who plays Abbie in the new Ken Loach film Sorry We Missed You. After showing the trailer, Debbie talked about the issues in the film and how she prepared for the role. She worked in a care home for four weeks and discovered what life was like for carers as they sought to balance their holding up of a creaking social care system while still seeking to be mothers to their own children even if it is on a phone. Debbie spoke very powerfully on how people portrayed in the film are in isolated vulnerable situations. Communities of support have disappeared.

In the ensuing discussion, Debbie responded to a criticism of many of Loach’s films and especially in I, Daniel Blake, that one is left with no sense of hope. Debbie’s response was to say that it was the family, the one place where people are not isolated, that was the source of hope. This point is made very clear in the film when policeman makes it clear to the son that in having a family that cares he has an advantage that sadly many do not have.

As I left the event, I reflected on the ‘them’ that have power. It is ‘big business’ and ‘big government’. I wondered on how we can build relationship with those in power so that people in run-down communities in Tyneside can speak truth to power. It also struck me that although ‘big business’  is not democratically accountable, ‘big government’ is supposed to be. We are at the start of an election campaign, so I do wonder if in a very limited extent, those who have power is not simply ‘them’ but in a restricted way it is ‘us’. When politicians want our vote, we have more power over them than once they are elected for up to five years. So perhaps at this stage of an election where the next one may not be till autumn 2024, speaking truth to power, could also involve the opportunity, or perhaps an obligation, we have to ask our politicians to make commitments on the issues that matter to us. I appreciate that people may be sceptical on promises made, but at least with promises on particular issues politicians will be accountable to the electorate for the commitments made. It would be regrettable if this opportunity to speak truth to power while those who seek power need our vote is wasted. So I am left wondering what commitments do I want those who want my vote to make. I sense the possibility of speaking truth to power will only increase if we all ask that question.

This article first appeared on the Independent Catholic News website.

There are more gatherings coming up, in Bristol, London and Birmingham – then in Glasgow and Cardiff in the new year. Click here to find out more and book a place!

The Right To Food campaign is in the news a lot at the moment. But what is it, and what does it call for? You …