Our Poverty Media Unit works with journalists and people in poverty, to generate powerful coverage that puts people first.

We know that if you want to truly understand an issue, you must talk to the people who are living with it.

We know that people who are or have been trapped in poverty have an unmatched understanding of the systems and structures that hold people back – and a unique insight into what could loosen the chains.

The UK media takes a great interest in poverty, but much of the coverage is flimsy or fleeting, failing to draw on that immense knowledge and wisdom in communities all over the country.

Our Poverty Media Unit works to improve the direct media representation of people with experience of poverty. We do that in various ways:

Got a press query? Visit our main media page

Read all about it: Some of our work 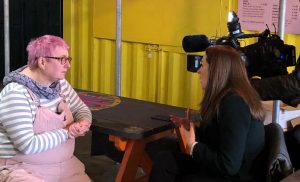 In the past five years, we have worked with local and national media outlets around the country. Here are a few highlights:

In early 2020, we worked with Joseph Rowntree Foundation and a BBC News reporter to help tell  stories of how poverty affects carers.

High costs, the low rate of payments and a lack of support all exacerbate poverty for millions of people.

We worked with Mary (pictured above) and Sydnie from York and supported them to tell their stories for the BBC News at Six and Radio 4, as well as for the BBC website, reaching an audience of several million.

We’ve worked several times in recent years with Channel 4 News, ensuring people and communities often overlooked are able to air their views and ideas.  This powerful piece aired on the eve of the 2017 General Election, and then in 2018 young people who we work with through our Food Power project led this report on children’s food security. 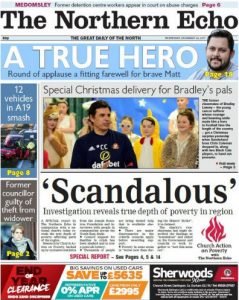 We have previously worked with community groups and projects in North East England and with The Northern Echo newspaper. We spent several months visiting groups and speaking with people experiencing food poverty. We used the Freedom of Information Act and gathered new statistical evidence, but the personal stories of ten people with experience of poverty were at the centre of the work.

The result was a powerful two-day special report, including front-page coverage both days.

Emma, a mum-of-two from near Sunderland, told how she went eight months with no income, after having her benefits stopped without warning.

Her comments went on to shape our Compassion in Crisis work, highlighting the removal of vital crisis support lifelines across England. 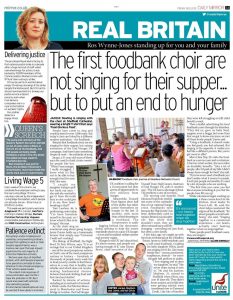 Last autumn, we spent several weeks working with a Daily Mirror journalist and people at a food bank in Sheffield, to tell their stories and to introduce the UK’s  first foodbank choir.

We also worked closely with Tony and Sue from York, who had been swept into homelessness and found Universal Credit a millstone rather than a lifeline. From an original story on our own website, we supported them to tell their story with The Yorkshire Post and the Daily Mirror, as they took their case to Downing Street.

The Yorkshire Post story had been part of a week-long focus on Universal Credit, on which we and the paper collaborated extensively.

We work closely with colleagues in other projects to maximise impact, such as by helping to tell the stories of members of the Your Local Pantry network, which helps to preempt poverty. 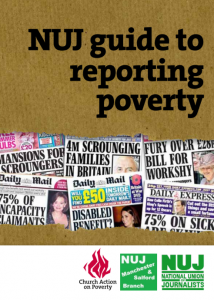 Since 2016, we have been working with the National Union of Journalists to produce and promote guidelines on how to best report poverty.

We co-produced a written guide and a short film and are currently working with the NUJ and others to produce updated guidelines, that will also showcase some of the fantastic journalism that has been produced when people in poverty are truly involved in the process.

Tap this image to read the guide

Sometimes, people simply want to tell their own story in their own words, unedited and unspun.

Our Voices From The Margins blog supports direct storytelling, from group conversations to detailed first-person accounts. More than 100 people have contributed to stories on the site so far.

Martin: How to unlock poverty for dads like me
Craig & Vicky: New romance left us £1.86 a day to live on

We know people with lived experience of poverty are the experts on their situation, however we have increasingly sought to present these stories in a broader context, making clear that single stories are not isolated cases, but indicative of trends that affect many people

Our community reporter method supports people in poverty to decide, create and edit their own stories in their own time, and we then help ensure the stories reach an audience.  We worked with York Food Justice Alliance to produce a short film that was shown at a public event in the city centre, to councillors and charity and community leaders.

We work with creative groups and individuals to tell stories in alternative ways.

We worked with 26 people from four grassroots groups, and with four professional authors, to produce poetry and creative writing about people’s lived experiences of poverty in Salford. We also worked with community groups in Salford to collate photographs that highlight the poverty and prosperity living side by side in Salford. This allowed participants to share their lived experiences through the medium of photography. An exhibition called Salford: Mind The Gap! was held at Salford Central Station and this free newspaper was distributed to passers-by.

What people say about our work

“All of the people who came to the training by Church Action on Poverty found it really beneficial and it got positive feedback. The consensus was that the theory was really good but they really enjoyed the interactive element and it was a useful chance for them to share their experiences.

When we created our website, it gave us an idea of what to consider. We recently met someone from the Scottish Government and there were some media there, and the handout was helpful in helping people prepare things they wanted to share with the reporter.”

“I find Church Action on Poverty to be an intelligent and compassionate organisation. They brought energy and insight to an important campaign for the National Union of Journalists. It’s clear many readers, viewers and listeners think the way poverty is reported needs to be challenged and that journalists need to reconsider what it is they’re contributing to.”

“One of the best things that has happened to me is getting involved in projects through Church Action on Poverty. It’s a great organisation and what I like is that they always try to get normal voices in there, which is really good. It can be scary doing it, but it’s great that we are encouraged to be involved. One of the things that happens with people in poverty is that their confidence and self-esteem are affected so it’s really important that people are encouraged to use their voice, even if they do not feel they have got one.”

Jayne, Salford, who was interviewed by The Daily Mirror and BBC Radio Manchester

“When Church Action on Poverty approached The Northern Echo to work with them, we knew straight away it was something we wanted to get involved in. There are shocking levels of poverty in the North-East, and one mum left with no income for eight months when her benefits were stopped told how conditions in her community are worse now than during the Miners’ Strike. In another piece, a man made redundant a year ago described how he sells fly-tipped scrap to put food on his table. Their stories have to be told if anything is to change.”

“I found it quite straight forward. It was a relief for me to get it off my chest and talk about the issues. It has made me more confident and made me feel better about myself. I know I am not alone; there are thousands of other people in similar situations.

“Now I have spoken out, I want my voice to be heard. Doing media work is really important if things are to change.”

Martin, Halifax, whose story was featured in The i

“People responded very positively to the media stories. It raises people’s voices and people were so articulate on the issues. From what I could see, it was empowering for people to be able to represent themselves. When you are disempowered, people speak for you. It’s really important to get a forum to speak for yourself.”

“I enjoyed the media work and I hope we have made some sort of impact. Having the videos of the choir on YouTube was also great as people can see what we were doing.

“I had a chance to say what I wanted to and I think it has made a lot of people realise that people from all walks of life might have to access food banks.

“I think it went really well and I’m confident now doing media. If the chance came again I would do it.”

“I enjoyed doing the community reporting and it has opened other doors for me and led to more work. I am now more able to speak out about things.”

“We’ve worked with Church Action On Poverty a number of times now and their incredible network of links with projects and organisations across the country has been invaluable.

“For us, the critical thing about covering  issues like poverty, welfare reform and the very many challenges faced by people living on low incomes, is making sure we hear from the people themselves.

“Church Action on Poverty have not only helped us make links with communities but rightly  ensure that the people who talk to us are looked after while they are taking part – with individuals running  projects making sure people are happy with the parameters of the interview and what they might expect from the process. We are incredibly grateful for the help we’ve received over the past couple of years and hope to continue to work together in the future.”