It was with great sadness that members of Church Action on Poverty heard of the death of one our members, Father Bill Rooke. He died on 3 October, which happened to be on the 49th anniversary of his ordination to the Priesthood. He was 73 years old.

After his ordination, Bill stayed in Rome for further studies. From 1971 to 1983, Bill was a curate, in Newcastle and then in Hebburn in South Tyneside. It was during this time that Bill was involved with the Charismatic Renewal Movement. Many people across the diocese and beyond got to know Bill through this movement. Bill then spent six years working in Kenya. On returning to the diocese Bill was parish priest in Stockton and then Gateshead. In 2002 Bill was appointed as Parish Priest to St Vincent’s and St Laurence’s in Byker, where he lived in part of the famous ‘Byker Wall’. This part of Newcastle has much deprivation and poverty. In 2005 Bill became involved with Church Action on Poverty North East, with Bill kindly hosting the monthly meetings at the church hall in Byker.

Alongside one of the local head teachers, St Josefa, Bill was a big influence on the ‘Images for Change’ campaign. Bill also  saw the important value of Credit Unions, working to promote Credit Unions across the North East. For many years he was Chair of  Gateshead Credit Union, going on  to become a board member of NEFirst Credit Union.

Bill was a clear, strong and independent thinker. He was never afraid to go against the majority view, always willing to challenge lazy thinking or common assumptions. His wisdom often brought fresh insight and he made you think more carefully about what was the right and just thing to do.

I will remember a man who was often making ‘roll up’ cigarettes, whose joy, faith, deep wisdom and care for others had a profound impact on those who encountered him. He will be greatly missed.

His body will be received into St Vincent’s Byker on 15 October with his Requiem Mass on 16 October at St Mary’s Cathedral at 12 noon. He will be interred at Heaton Cemetery.

We are looking for a new chair for our Council of Management, Church Action on Poverty’s board of trustees.
News

People in Smethwick will be able to save on their weekly shopping bills, thanks to a new project that officially opens today, 21 January. Smethwick …
Resources

We are looking for a new chair for our Council of Management, Church Action on Poverty’s board of trustees. 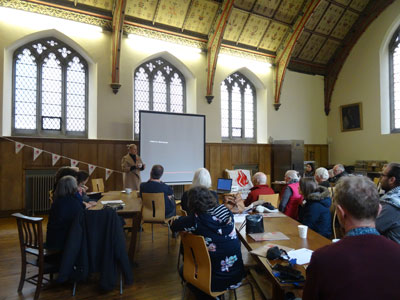