Church of the poor: on the cusp of the absurd 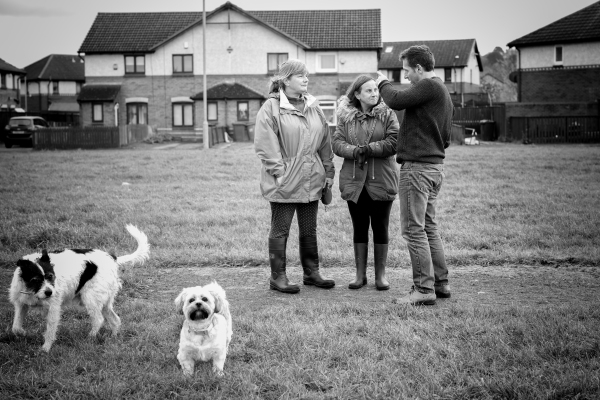 The Methodist Church’s National Learning and Development Coordinator for Scotland and Shetland, Gary Williams, challenges the Church to learn from the margins. This article first appeared in Connexions magazine, and addresses many of the same concerns as our Church of the Poor work.

I saw lots of drugs use and violence, lots of sacrifice and sharing at Ferguslie Park, where I spent a good bit of time in the early 1990s. I worked in Ferguslie, a housing estate near Glasgow Airport, as part of my role as Scripture Union Scotland’s Urban Coordinator. I was to ‘walk the walk’ here, one of the most disadvantaged areas in Scotland, to offer support to other urban communities in a manner which was credible and authentic.

The truth is that I wasn’t ready for the challenge.

During my time there, two members of our extended church family were murdered and one young Christian man took his own life. I also vividly remember a bank teller laughing in a local mum’s face when she tried to open a bank account (her first one) for the church youth club. There was something about the address that caused great hilarity.


Now here’s the thing: I believe that Christ is King of Ferguslie Park. I honestly do. That causes me no end of problems, and yet it fills me with intense hope. I can say that now, after almost twenty years. The truth is that when I left, I was broken and confused. What I had tried to do hadn’t really added up to much. Yet I’ve revisited that place on many occasions. The families who taught me so much about real sacrifice are still in touch. My best man was Ferguslie born and bred and although never rich, he was the most thankful Christian I have ever known. He shared his life with me in the most rugged and authentic manner. His experience of a tough upbringing and of young men ‘having each other’s backs’ helped him to grasp something of the visceral depth of God’s sacrifice in Christ.

Jesus is King of Ferguslie Park! Some local Christians are being turned upside down by Jesus.

It’s wobbly and difficult to understand and it’s often hard for many of them to see their part in God’s grand plan of redemption for the estate and for the world, not least when many daily pressures around poverty and powerlessness persist.

But King Jesus is somehow present in all the streets of Ferguslie, bringing hope, forgiveness, renewal, justice and redemption. Is that absurd?
I am exercised by the fact that Methodism seems to be losing its presence most rapidly in housing estates and inner city areas. Yet when I carried out research last year into evangelism in five Methodist churches/projects in disadvantaged communities across Britain, I found that small communities of faith are forming. There is space for people to shape what happens, there is honesty and vulnerability where leaders and participants often face the same issues.

No one seems to be ‘fixing anyone else’, but instead there is a sense that people are journeying together and learning together.

In these places of fragility, awe and wonder, perhaps the Church will see and experience renewal. It’s not that Ferguslie Park or places like it are full of saints; far from it. It’s not that infant mortality or premature death or loan sharks on the streets have all been eradicated; absolutely not. There is still despair, anger, injustice evil, rage and frustration alongside sacrifice and compassion. There is hope and redemption because there is not one square centimetre of Ferguslie Park to which Christ does not lay claim – soiled, stained yet beautiful.
But isn’t that absurd? Wouldn’t it be more sensible for God to be a thoroughly decent bloke who rewards people living in decent places, who put in a decent shift, a disciplined life or a good innings? And what about the vast majority of Methodist churches serving village or suburban areas – surely people in these places are not inured from hardship or pain, anxiety, depression or bereavement? Isn’t Christ King of these places too?
It is absurdly true and beautiful to know and follow a God of grace and justice who lays claim to the whole world and who is active within it, despite lots of apparent evidence to the contrary. And many people are suffering in places that we would not necessarily consider to be poor or disadvantaged.

But if we bring the people on the margins (some of whom live in inner city estates) to the centre of the life of the Methodist Church in Great Britain, will we not be more likely to be faithful in all of our neighbourhoods?

Let’s be faithful, let’s live on the cusp of the absurd, and let’s see what happens.

Gary Williams from the connexion, the free magazine of the Methodist Church, www.methodist.org.uk
To receive your free copy, please visit www.bit.ly/the-connexion